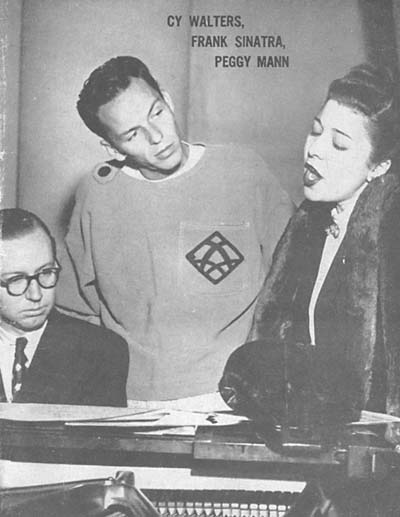 From Tony Caramia, Professor of Piano, Eastman School of Music, "I found this on one website:"

There does not seem to be much published information available about Cy Walter, even such basic information as his date of birth (or even, ifit's unfortunately applicable, a date of his passing).

We have found that Walter was one of the pianists on one of Mabel Mercer's finest albums, "Mabel Mercer Sings Cole Porter," which was originally released on Atlantic Records in 1955, then re-issued in 1994. We can also tell you that selections from this album were included on a compilation of New York City cabaret called "Ertegun's New York Cabaret," released on Atlantic in 1987. But the Cy Walter trail is cold except for that.

I found out that he was born Sept. 16, 1915, and died August 18, 1968. Also, from Kinkle: Cocktail pianist with sophisticated style and musicianship, extensive repertoire. Educated at the U of Minnesota. To NY 1934, worked in clubs. 1945-51 at Drake hotel there. Late 1946-7 on Frank Sinatra radio show. Many appearances on Piano Playhouse radio show of 40s.

Again at Drake late 50s until death. Composer of "Some Fine Day," "Mrs. malaprop," "You are There," "Nocturne".

Thanks to an internet buddy I've put together two cds of rare Cy Walter recordings.

The first cd contains tracks from

The second cd is

The following Piano Arrangements were transcribed by Al

All of these songs are available as MIDI, SHEET MUSIC, .pdf files, CD or on cassette. You can order anything by email

midi Birth Of The Blues

midi Blues In The Night

midi Dancing In The Dark

Return To the MAIN BALLROOM or the FRONT LOBBY