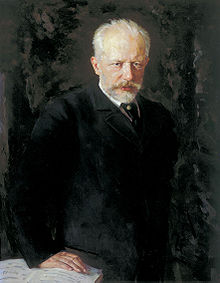 Pyotr Ilyich Tchaikovsky (May 7, 1840 ñ November 6, 1893) was a Russian composer of the Romantic era. His wide ranging output includes symphonies, operas, ballets, instrumental and chamber music and songs. He wrote some of the most popular concert and theatrical music in the classical repertoire, including the ballets Swan Lake, The Sleeping Beauty and The Nutcracker, the 1812 Overture, his First Piano Concerto, his last three numbered symphonies, and the opera Eugene Onegin.

Born into a middle-class family, Tchaikovsky was educated for a career as a civil servant, despite his obvious musical precocity. He pursued a musical career against the wishes of his family, entering the Saint Petersburg Conservatory in 1862 and graduating in 1865. This formal, Western-oriented training set him apart from the contemporary nationalistic movement embodied by the influential group of young Russian composers known as The Five, with whom Tchaikovsky's professional relationship was mixed.

Although he enjoyed many popular successes, Tchaikovsky was never emotionally secure, and his life was punctuated by personal crises and periods of depression. Contributory factors were his suppressed homosexuality and fear of exposure, his disastrous marriage, and the sudden collapse of the one enduring relationship of his adult life, his 13-year association with the wealthy widow Nadezhda von Meck. Amid private turmoil Tchaikovsky's public reputation grew; he was honoured by the Tsar, awarded a lifetime pension and lauded in the concert halls of the world. His sudden death at the age of 53 is generally ascribed to cholera, but some attribute it to suicide.

Although perennially popular with concert audiences across the world, Tchaikovsky's music was often dismissed by American critics in the early and mid-20th century as being vulgar and lacking in elevated thought. By the end of the 20th century, however, Tchaikovsky's status as a significant composer was generally regarded as secure.

All the music on this web site is available as midi, printed music, .pdf. files or recorded on tape or CD.

You can order anything by clicking HERE

Back To the Concert Hall or Return To The Main Lobby