I am placing this incomplete and brief bio on the net because it was requested by a few people. If it seems pretentious, please forgive me. (You don't have to read any of it).

Utica College of Syracuse University (chemistry major) I left school to study arranging with
Sy Oliver, Don Walker, Dick Jacobs and John Warrington in N.Y. While Studying with Sy, Dick and Johnny I was hired to work for them. I was fortunate enough to stay on the payroll for four or five years and attended hundreds of recording dates with Sy at Decca, and Dick at Coral Records. At these sessions I met many of New York's (if not the world's) best musicians. I became very friendly with Billy Taylor primarily because he played the piano on most of the dates.
I Took some piano lessons with Bill Krevitt, Badura Skoda's teacher, Robert Goldsand and others. Studied composition and scoring with Vittorio Giannini, Ludmela Uhlella, Nicholas Flagello, Tibor Serly (Bela Bartok's editor and partner) and many others.

Attended Manhattan School of Music and in June of 1955 (on the same day), I was Awarded my bachelors degree in music composition and the first Masters degree in Music bestowed by MSM.

My class mates at Manhattan School were GI's returning from Korea and thus included stars from the Metropolitan Opera, Count Basie's Band, Broadway shows, etc. Percentage of seasoned professionals enrolled must have been about 90%. The other 10% were high school graduates, exchange students, and other misc. such as Miss America (Bebe Shoppe), a vibraphone player. Total enrollment was 500 give or take. The school worked on a 50% curve which means half of each class disappeared after a given semester. Manhattan was awarded the highest rating by the Middle States Association during the time I was enrolled. Performing artists in the school at that time included Herbie Mann, Joe Newman, Sam Most, John Lewis, Max Roach, Clem De Rosa, Joe Wilder and many others.

I took doctoral courses at Columbia in Music Education and Music History. Took many other courses at Hunter College (with Don Walker - the man who scored shows such as The Music Man, Pajama Game etc.) I earned NY State and NY City Certification for teaching music at any level.

1949 I was hired by Sy Oliver, Recording Director for DECCA Records, (To see a list of Sy Oliver's work visit The New York Public Library web site. The list is much too long for me to put here),

to assist in office work and some music chores. While I was with Sy I worked with Dick Jacobs (arranger), Johnny Warrington (arranger), and the full roster of recording artists at Decca. (Louis Armstrong, Bing Crosby, Andrews Sisters, Jolson, Tommy Dorsey, Sarah Vaughan, Mills Brothers, etc.)

I worked full time in just about every area of the music industry. Joined the American Federation of Musicians in 1949 and Local 802 in 1950. Just after high school (summer of '49) I worked a hotel in the Catskills playing piano with a band. We played for dancing during the week and played for the shows on the weekend.

During my college years I worked clubs all over New York including Greenwich Village, picture taken at Mona's. 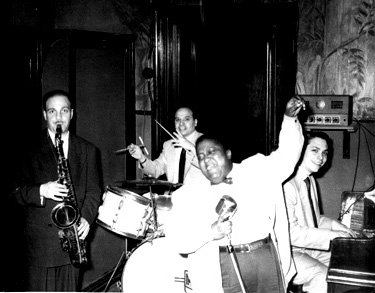 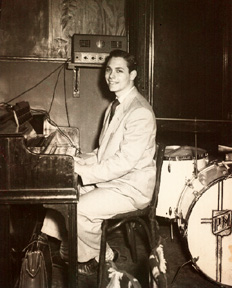 My trio played The Copa, Ben Maksik's, etc. I was also involved in writing for WNEW house band (Roy Ross) who thankfully recorded a few of my arrangements such as I Married An Angel, Yes Sir That's My Baby and California Here I Come.

I also wrote for Jack Sterling at ABC, and other Radio and TV shows. I kept busy writing arrangements for many night club acts and was partially responsible for the stardom of some. I also copied parts for Broadway. To mention a few of the tasks, there was "Three Wishes For Jamie", The Saint Of Bleeker Street" and "The Music Man".

1955 I joined the U.S. Army and was trained in radio and communications. First , I was made a teacher and later a music arranger for some of the bands. The officer in charge of the base sent me on tour with a show group as musical director and accompanist. I was honorably discharged from the service at Fort Dix on a Tuesday night. The next day, Wednesday, I went to Local 802 Union Hall and got a gig with Ollie Phillips (Country Music) playing at a bowling alley half way between my home and guess where... Fort Dix. It was at the junction of Route 1 and Route 9. We played every Friday, Saturday and Sunday evenings for a few months. 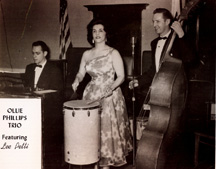 After the service I continued playing weekends, writing commercials for firms such as B.B.D.& O. for Colgate Palmolive, Chrysler Corp, Sylvania Electric and many more. Sylvania hired me to score an industrial show. It turned out to be the best production they ever had. While working for Savitt studios (sound track for a film), the team won the advertising award for Best Production of the year. I did lots of vocal coaching, teaching, writing and rehearsing various performers besides writing music and playing. I helped some of the people audition for clubs or Broadway shows. Amongst them was Rita Gardner, plus artists such as Paula Wayne, Danny White, Pete Vardas.. too many to remember all the names.

One of my trio gigs with Sammy Napp (Drums), Joe Severoli (Tenor) and me "playing" the squeeze box. 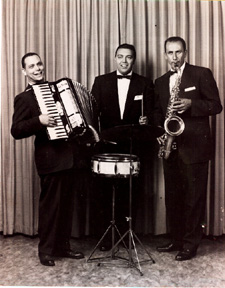 I was featured on a thirteen week show entitled "Up Beat Saturday Night" (C.B.S. radio) as guest arranger and conductor. I was the youngest arranger ever featured on a C.B.S. show. (They even bought my original songs, cash.)

Songs featured on the CBS show were The Way You Look Tonight, Imagination and an original entitled Suzieq.

"The Instrumentals" was a 4 piece group during the mid 50’s who specialized in a variety of musical genres from 50’s rock to latin and even popular music. The goup was conmprised of four musicians which included Jay Tanner on Guitar, Bobby Miller on Saxaphone; Bobby Rose on Accordian and Marty Ross on Drums. All of the musicians came from Queens and The Bronx and worked throughout the Metropolitan New York area and in the Catskill Mountains at the Brickman’s, Grossingers, and other fine, resort hotels.

What Have They Done To My Song, Ma!

Click this link to see a modern day video of The Instrumentals playing "Are You Nervous, Nope!"

I was hired as recording director for Gallo records, Ace Records, (all free lance work) and continued working with people such as Dick Haymes, The Ink Spots, Steve and Eydie, and many others. I met people such as Russell Bennett (Victory At Sea and all of the Rodgers and Hammerstein Shows), Blackie Shatner, Don Walker, and most of the New York arrangers in the top ranks. At this point I was hired as a ghost writer for Dean Kincaid. Dean wrote many many commercial backgrounds plus charts for Robert Farnon, Count Basie and others.

To sum it up, I arranged music for a living plus accompanied acts, rehearsed shows, worked on Network TV, local radio, night clubs, Bar Mitzvas, and many other musical gigs.

Here's a picture with my favorite group. We were the show band and always signed minimum one year contracts with various clubs. Our main venues were The Ridgewood Terrace, The Ridgewood Rathskeller and The Las Vegas Club (pictured below) in Syosset. Other venues: Ben Maksik's in Brooklyn, The Midwood Terrace, The Copa Lounge (Manhattan). 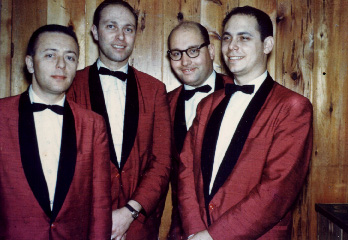 You shoulds' seen our Gold Jackets!

In 1959 I created Wakup To Music Inc., a piano school. The school hired about 40 teachers, mostly part time workers, and taught about 500 piano students a week. During this period I wrote fifteen books on teaching piano. I used the best ideas from Robert Pace and a fellow named Harry Davis. 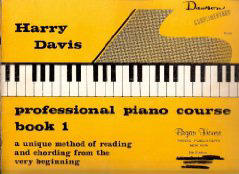 Harry (student of Scnabel) was a champ at "rote" teaching (Play a pop tune in 30 minutes) and Pace had all the theory down. (His books are very dry and terribly misunderstood). Robert Pace was the head of the music department at Columbia Teachers College in NY.

Over a twenty year period the staff of Wakup To Music taught more than 1/2 million lessons. The pricing was four times the norm, (about $25.00 per half hour in 1950) and we couldn't keep the referrals away. Each student could sight-read (in real time), transpose, improvise, compose, create accompaniments, etc. Best of all they could take a tune and create a pop arrangement in a style either like Andre Previn, Carmen Cavallaro, George Shearing, Peter Nero, Fats Domino, etc.

I was told at the time (1950 - 1970) that the books were really computer programs. At that time I would not have known a computer if I fell over it. Bye the bye I became a programmer, (using Dataflex now but originally I programmed in Assembler and BASIC). On re-reading the books I thought, "indeed we have a computer program with at least eight simultaneous routines happening throughout."

Sandy Feldstein * (then VP of Alfred Music) looked at the books, at his request. He laughed and said "you are only 100 years ahead of the teachers, they'll never sell". Only Sandy and the head of the Music Dept. at Yale understood the subtleties and both of them reacted similarly. Bottom line is the books work and putting them on a computer was one of my dreams. After moving to TEXAS (2002) I did create electronic copies and I print them out as needed.

One of my youngest piano students, age 4, said "I want to be a rock and roll star". He took piano lessons from me through his High School days. To see what became of him you can read about him on myspace.. His name, Jon Carin

In 1970 or there abouts, I gave it all up. Then I was called a computer consultant. I was President of the Long Island Computer Association many times. I was the editor of the News Letter for LICA for twenty one years. I acted as a hot line to apx. 1500 people at no charge. The club is all volunteer work. Despite the fact that I am self taught, I was able to survive by writing database programs, assembling, repairing and selling I.B.M. compatible computers.

November 1992: My dad died. Someone gave me a Yamaha Keyboard. It sat for two weeks without being touched.

Since July 1994: I have used that keyboard to produce better than 3000 arrangements of songs .

P.S. I used Voyetra Gold for sequencing and Finale for notation. Hardware includes the above mentioned Yamaha YS200 for input, Proteus I, Proteus II, Roland's Sound Canvas (for General Midi), and the LogicTech SoundMan Wave (for multi media). Almost forgot, I used the Voyetra's V.24S interface. (1997)

Please send all comments to: Al Levy Musician at large.